Why is Marcel Duchamp’s Bicycle Wheel Shaking On Its Stool? 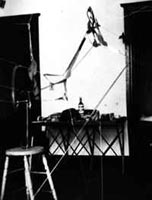 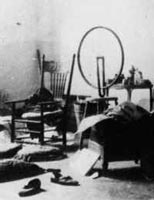 As in an IQ test, to determine how this “Bicycle Wheel on a Stool” looked in its life as a 3-dimensional physical object, we must:

The results of our analysis, based upon the “factual” information provided by these photographs, confirms that, for each of the 5 photographs, each of its corresponding 3-dimensional reconstructions indicates not just one Bicycle Wheel and Stool, but a Bicycle Wheel and Stool in five distinctly different shapes. Moreover, the straight fork disappeared from bicycle design in 1884 with the invention of the modern “safety bicycle” 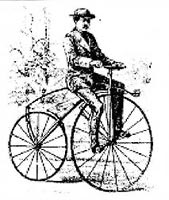 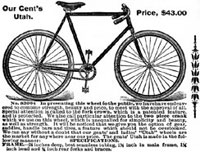 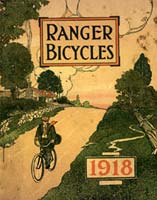 The straight fork bicycle might have looked fine, but the irregular twists, turns, throws and pitches of a Bicycle Wheel, when attached to a straight fork, were dangerous and unstable — hence, the name given to the bicycle with a straight fork design: the “Bone Shaker.”By 1916-17 (when these photographs were taken), any truly readymade bicycle fork would have been curved in shape, not straight. Manufacturers had not produced bicycles with straight forks for over 30 years (see Figure 5 and 6 for buying curved bicycle fork parts in 1918). Even a very old bicycle in 1916 would have had a curved fork. As such items were not mass produced, easy to find, or accessible as readymade, a straight fork would have been difficult for Duchamp to find and build. However, the straight fork is only part of the story. Importantly, Duchamp mentioned “unstable equilibrium” versus “stable equilibrium” frequently in his notes. When considering:
1. The off-center axis of the wheel
2. The broken rungs and irregular leg positions of the stools
3. The tilt of the wheel and fork (see Figure 1), one could argue, after examining Duchamp’s 5 Bicycle Wheels and Stools, that none were ever in an equilibrium. In fact, Duchamp would have had to glue the stools into their irregular shapes, and tie string to support the five Bicycle Wheels and Stools, in order to permit them even to stand, let alone spin. Based upon the new facts just revealed, is Duchamp’s “readymade” Bicycle Wheel and Stool an experiment and schematic diagram of chance? As in all chance systems we can make certain predictions. For example, we can observe that the Bicycle Wheel and Stool will fall but we cannot say exactly when. Duchamp’s 5 photos challenge us to use our minds and to “look” analytically at Duchamp’s Bicycle Wheel and Stools to see the wheels spin in time — not by expectations based upon prior knowledge, but by the factual structure depicted right in front of us..

After making the initial computer 3-D reconstructions of the Bicycle Wheel and Stool, ASRL has built physical models and will soon be broadcasting videos of the experimental results on the ASRL site. Nothing captures the focus and purpose of ASRL better than this example of Duchamp’s Bicycle Wheel and Stool in combination with our use of methods in both art and science for developing results of scholarship via critical thinking — an indisciplinary approach that we plan to share with others interested in what Duchamp called “the beauty of grey matter.” Please check our Marcel Duchamp Online Studies Journal, tout-fait.com for other examples of Duchamp’s fabrications (in both senses of the word — constructions and “fibs”) as part of his larger game and strategy with and against us, the spectators.