As with all detective stories that deserve respect, Duchamp’s Gioconda story begins with a flashback. It is the autumn of 1919 and the world is celebrating the 400th anniversary of Leonardo’s death. Gabriele D’Annunzio proclaims Leonardo’s artistic genius. The poet Paul Valery pays tribute to his scientific gifts. Sigmund Freud analyzes his neuroses. Marcel Duchamp, who was already known for his reputation as a provocateur, even within the Dadaist circle, celebrates the anniversary in his own way. He takes a postcard reproduction of the Gioconda from an antique stand on the Rue Rivoli and adds to it a mustache and beard. This gesture changed the history of modern art.

At least this was the way in which he told the story: “It was such an admired and well-known image that it turned easily into an ideal subject for scandal.” Duchamp later declared, “I tried to do the mustache in an artistic way, noticing that with beard and mustache, the poor girl became very masculine.” To the masterpiece was given the title L.H.O.O.Q. — initials which, when pronounced in French, sound like the French expression for “she has a nice ass.” The word play was overshadowed by the desanctifying power of the violence inflicted upon the Mona Lisa, which summarized all the ghosts that haunted art at the turn of the millennium: the role of the artist and his desecration, sexual ambiguity, political identity, questions about the originality of the work of art, the rise of graffiti and pop art. These and other issues have been seen and admired by artists and critics in the smile of Duchamp’s Mona Lisa for the last 76 years, apparently failing to grasp the most important point.

Now a very loud laugh, itself a Dada move, could overturn all these theories at once. According to Rhonda Roland Shearer, a New York sculptor who has authored a number of scientific articles, underneath Duchamp’s Mona Lisa is hidden Duchamp’s face. “It is a montage; probably a lithograph born from a superimposition of two images,” says Shearer, after two years of research, to Panorama. On one of the walls of her Soho loft which she shares with her husband Stephen Jay Gould, the famous evolutionist, there are many postcards of the Gioconda which could be bought at the beginning of the century, “but none are of the dimensions used by the artist.” In her library, there is a collection of magic books and photographic tricks that fascinated Duchamp — “he did all of the experiments described in each volume.” On the computer screen we can see the incriminating images: Leonardo’s original, Duchamp’s version and a portrait of the artist when he was 25 years old, which was probably used in the photomontage. The enigmatic smile is the same as the one in the Mona Lisa.

To prove her theories, Shearer prepared a book, a series of four CD’s, and a symposium, which will take place at Harvard University in November. The February edition of ArtNews, an authority on contemporary art, dedicated an article to her research with the title “Did Duchamp Deceive Us?” Apparently the deception is not only limited to the Gioconda, but to all of the readymades–the found objects that once displaced from their context are transformed, by the artist, into art. It is thanks to Duchamp and his toilet seat, tea cup, shovel and bicycle wheel, that a generation of artists could transform their feces and vacuum cleaners into art. But, according to Shearer, Duchamp deceived them here as well; the readymades are in reality, as the Gioconda, unique, carefully crafted pieces, in which the artist’s intervention is far more complex than the simple application of mustache and beard.

During his career Duchamp produced about twenty readymades. Most of them were lost. Many were never exhibited or the only proof of their existence is through photos that friends like Man Ray would shoot. All of the objects that inspired Duchamp are now collected in Shearer’s studio, after laborious research in both Paris and New York antique shops.

Here is the urinal, titled Fountain, that the artist sent in 1917 to the Independent Artists Society exhibition in New York and that was rejected as an insult. “Obviously this is not the original, that one has been lost,” Shearer informs us. “There is no identical piece to the one that Duchamp photographed in 1917 in any catalogue of the time, and the reason is simple: because it was created intentionally.” The same, according to Shearer, occurred with the snow shovel that he called In Advance of the Broken Arm. “He took a shovel and got rid of the supports that hook it up to the handle. Anyone that used the shovel would have definitely ended up with a broken arm.” And what about the birdcage filled with marble cubes named Why Not Sneeze Rrose Selavy? “The cage was cut in half.” And the small perfume bottle Belle Haleine – Eau de Toilette? “The one which was for sale at the time was a different color than Duchamp’s bottle,” Shearer stresses.

According to Shearer, Duchamp applied a complex geometrical model to his readymades, derived from the theories of French mathematician Henri Poincaré. But to deliver a readymade together with the list of modifications, as Duchamp often did, was an attack on the viewer’s abilities to see. “Duchamp said that he applied beard and mustache to the Gioconda, and so everyone only saw that for years. But that was the trick of an illusionist with an immense knowledge of the functioning of human perceptions,” declares Shearer. “More than once Duchamp dismissed what he used to call ‘retinal’ art: now we can better understand what he was referring to.”

Paradoxically, Shearer’s work is also going to help gain a better understanding of the artist, who in 1912 declared his intention to destroy art and who in1923 actually quit making art–when he was only 33 years old–yet continued to create sculptures. Or the man who signed most of his work Rrose Selavy and frequently showed up at the photographers in women’s clothing: “It is better to change sex than religion,” he would declare.

Duchamp was acclaimed as a genius by Surrealists and Dadaists and was the source of inspiration for Jasper Johns and Andy Warhol who attributed him with a fundamental understanding of the mechanisms involved in becoming a celebrity. The importance is not only to create art but to live one’s life as a masterpiece. — this is advice that Duchamp followed, traveling and living between Paris and New York until his death at 81, in 1968.

If we consider the world of Art at the end of the millennium, Duchamp rises as a primary figure. “He influenced the art of this century more than Picasso and Matisse,” wrote biographer Calvin Tomkins. It is also because of this — his status as a pivotal figure — that Rhonda Shearer’s discoveries have triggered a war among contemporary art history scholars even before her theories have been published or verified. 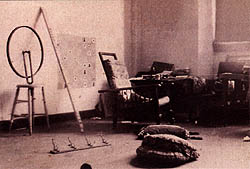 “Indeed if Shearer’s theories were found to be true, then all the aesthetic that lies behind the creation of the readymade will collapse,” Arturo Schwarz told Panorama. Schwarz, biographer and friend of Duchamp, used to be the greatest collector of Duchamp’s work before donating it to museums all over the world. “But the truth is that most of Shearer’s conclusions are wrong; why would Duchamp have had to deceive the entire world?”

In 1964 Schwarz produced thirteen readymades, each one signed and supervised by Duchamp. One of the pieces was Hatrack, a coat hanger that was originally lost by Duchamp. But the object produced by Schwarz has six hooks of equal length, whereas in Duchamp’s photos and drawings the original had five hooks of different lengths. “The truth is that I too did a model with unequal hooks but Duchamp told me that the photos where wrong, I had to change it at my own expense,” explains Schwarz.

A similar conversation was held between Duchamp and Ulf Linde, who in 1961 was the first to reproduce Duchamp’s readymades under Duchamp’s supervision. “I redid the Bicycle Wheel and was told by him that it didn’t have anything to do with the original one, but anyway it was fine and if needed I could have altered it later.” Linde told us this from Stockholm where he runs the Thielska Gallery. Linde is also convinced that behind Duchamp’s Mona Lisa is hidden the artist. “Shearer has taken the mask off.” Of the same opinion is Charles Stuckey, curator of the Kimbel Museum at Fort Worth. “Her hypothesis is absolutely coherent with Duchamp’s biography.”

Duchamp’s Mona Lisa, now property of a Swiss collector, will be exhibited to the public again next March at the Museum of Modern Art in New York. But according to Stephen Jay Gould, who has closely followed his wife’s research in the last two years, the original is not going to add anything to Shearer’s discovery. “Her discoveries are based upon scientific method and not upon art criticism, this is why they are different from other ones.”

It could be that her approach is the only possible one if we want to trap an illusionist master like Duchamp, as he is described in a document of the French national chess team, of which he was a member: “his style is ingenious and his impeccable ability to profit from even the smallest advantage makes him a formidable opponent.”